Being a true gent I took my girlfriend out for a drink and dinner the other week up in central London.  I did manage to chose the location so of course there was no question that we would be going to a pub on my list.  We went over to the Argyll Arms as she had been shopping on Oxford St.  Located in one of the busiest parts of London just near Oxford Circus the Argyll Arms is certainly not going to suffer from a lack of passing trade.  Finding the pub easily it was obvious that it was popular with a wide range of after work drinkers.  Everyone from, city boys, scaffolders and tourists were outside having a pint after work.  Entering the pub it was clear it was a Nicholsons pub.  I’ve been to enough now this year to be able to spot the pub styles very quickly.  The dark wooden panels and bar with dark wooden floorboards and etched glass reminded me of several of the pubs I’d been to already.  The dark wooden interior with some dividers around the bar reminded me of the Windsor Castle and the etched glass reminded me of the Sailsbury.  Neither features were as striking at the two pubs mentioned but they are well set out and provide a good historic looking interior.  I’m not sure how much is original or not.  The back of the pub was carpeted and did suffer from the stale beer smell that gets trapped in the windowless rooms at the back of pubs.  The bar man was pretty useless, a bored South African who was clearly tired of working in a pub serving tourists who didn’t speak English. 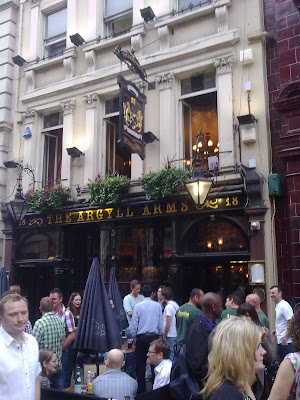 We managed to get ourselves a drink after some eager non English speaking tourists worked out what they wanted.  I had a pint of the Atlantic IPA by Sharps which also had quite a sharp taste.  The range of beers is not too bad, fairly decent for a central London pub.  Nothing overly special about the beer though. 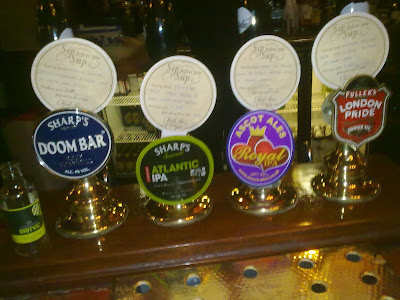 When I had mentioned to my mate woody that I was going to the Argyll he gave a shake of his head to indicate he didn’t think much of it.  I found it a fairly middle of the range pub compared with the pubs visited so far on my list.  This is not by any means a write off as I think I’m usually fairly critical so to get middle of the range from this list means it would be bloody good compared to most but not outstanding overall.  The best thing about the pub is that it has managed to maintain its character in such a busy area surrounded by other standard pubs and ubiquitous coffee chains.
I’d recommend this pub if you are up in that part of London but don’t go too far out of your way for a pint there. 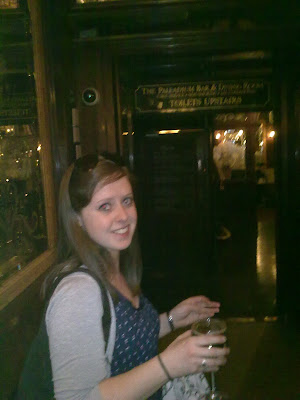